Twitch.tv and Fortnite– is the name of one of the most favorite duo to gamers. When it comes to a combination of game streaming platform and games that are streamed online, this pair will rule the list.

And Timthetatman is one of those few gamers, who had been able to skyrocket their full-time gaming career through this duo.

Timthetatman is the online alias of Betar, an 29 years old American streamer. And today, we’ll learn about himself, and the microphone that he uses for his streaming sessions.

The alias of Timthetatman is of the person with the real name of Timothy John Betar. Betar is an Americal twitch.tv streamer, born in 1990. Apart from his massive popularity over the gaming streaming platform, Timothy is also a famous internet personality.

Betar started streaming in twitch.tv back in 2012. And since then, he has a current follower base of over 3.5 million. The most regular games that Timthetatman plays is Fortnite, Counter-Strike Global Offensive Overwatch, World of Warcraft, etc.

Over his massive popularity over the gaming streaming website, Betar had been selected as an official eSports athlete. Also, he is sponsored by Audio Technica Corporation. On top of that, he is one of the certified twitch.tv partner, which had turned into a full-time creator since 2014.

He has joined Youtube in the year of 2011. And currently, his youtube channel has a subscriber base of over 1.2 million. In together from Youtube and Twitch.tv, his gross income is not a small figure at all.

When Epic Games released Fortnite in 2017, it started to be twitch’s one of the most streamed games. And in 2018, the company held a celebrity Fortnite competition. In this content, Timthetatman teamed up with Mack Wilds, an actor, and recording artist.

This part of this event was one of the biggest session creators in the year of 2018. Afterward, the online follower base of Timthetatman skyrocketed to many extents. 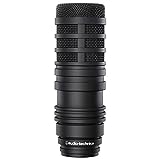 The Audio-Technica Dynamic Microphone BP40 got released in 2015, and since then, it has been able to hold a strong position among professional audio enthusiasts. It has been the brand’s first broadcast type voice microphone, which turns in to a position of a flagship model from the brand. Although, it’s not officially acclaimed so.

At first glance, you might think that the design of the microphone is inspired by the RE20. But let’s take it easy, as the design of RE20 is quite iconic and it had set a benchmark in the industry.

However, if you want to diver into the direct comparison between these two popular microphones, there will be quite some similarities. As an example, there is a large diameter body, square-ended shape, a mesh grille of mesh type and a chunky frame- these are what we found between these two microphones.

Let’s get into the physical aesthetics of this microphone at first. This mic is of a length 164mm, and the diameter is 56mm. Both of these dimensions lead to a minimal footprint.

The overall weight is 632g, which is a thumbs up for professional grade microphones.

One of the best selling points of this microphone is mechanical shock isolation. The design pattern of the model comes with a hypercardioid polar pattern. On top of that, it is mounted right on a flexible internal suspension. Result? You get the ultimate isolation from any kind of shocks.

You might have noticed that the internal construction comes with the front diaphragm on about halfway with the large mesh grille. The benefit of such design is- it lets the mic to take the sound from a rear direction of the capsule. Apart from that, it keeps taking sound input from the front direction as well.

Now lets come to another of the most important features- the ease in setup and assembly. But fitting or removing the mic from the given cat’s cradle shock mount is quite easy. In the all-plastic made shock mount suspend, there is an internal mounting career as well. This will make the installation and assembly process rather easier.

One of the most annoying thing for people who record on microphones is to deal with the noise. With even many pricy models, you can’t find any built-in solution to deal with it. Specially, we would recall the popular AT2020 and AT2035 models. But thanks to the manufacturer, this microphone is quite fine from that viewpoint.

However, before you make up your mind about purchasing this headphone, here is a caution. We’ve talked about the shock mount setup, right? Well, this is not something that you will get inbuilt with the model. So don’t forget to add up this shock mount into your cart while buying this microphone.

So, what’s our overall analysis report? Well, in one word we liked the overall specs and the values provided by them. Although it costs quite some bucks, and it takes some more bucks for the shock mount as well. But if you have the plan to set up a studio like Timthetatman, we think it’s completely worth it.

Timthetatman uses the headphone called Audio-Technica Dynamic Microphone BP40. And by now, you’ve been informed about both of the concerns. We’ve covered up some basic information on who Beta is, how he works, where are the streaming sources of him and what kind of games he is up to.

In the next part of the content, we’ve shifted our radar onto the microphone that this gamer uses. If you’ve been of a fan of awesome streaming quality that this gamer comes with, we’re certain that you’ll love to give Audio-Technica Dynamic Microphone BP40 a try.