Being a popular rapper and Youtuber, Logic or Robert Bryson Hall had become quite a sensation to youth. And over time, there had been a tremendous amount of curiosity about the gadgets that he uses, and the gear he has in his recording studio.

In today’s post, we’ll answer one of the frequently asked question about him- what mic does logic use?

Logic is a 27 years old American rapper, who has his real name of Sir Robert Bryson Hall II. Such a bulky name he has, but he is a sweet and nice person in real. His fame started to take place when he first started with Visionary Music- a recording label. After a few mix-tapes, he had his fourth mix-tape release with the name of Young Sinatra. And this is where he earned massive critical acclaim.

These list of mix-tapes created even a bigger underground fanbase of Logic, and he became a sensation in Spotify and other music streaming websites.

Eventually, Bryson moved forward with his music, and the popularity of his mix tapes earned him a contract with Def Jam recording, one of the big recording labels. With the company, he released his first album- Under Pressure.

After the massive success of his album, we kept on releasing albums. And his third album earned a place in the billboard 200 and was sold for more than 240000 copies.

Over a great kickstart in his music career, he started his own youtube channel. And that channel had also earned more than 1 million subscribers by now.

So far, we’ve been able to capture Logic to talk about his microphone once in the interview.  And that’s what we are going to talk about for next few minutes- 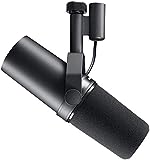 The best selling point of this jackpot from Shure is its flat and wide range of frequency response. Now, what does it mean and how come it’s so important?

Well, unless you want a great, clean and natural sound to be produced within your headphone, the high-frequency response won’t mean anything to you. But if you’re serious about the quality of audio reproduction, then it’s so much important to care about.

For professional recording like Logic, rejection of electromagnetic hum is quite important. Because this will work against the sound interference that is emitted by computer monitors. This headphone is perfectly optimized for that.

Another professional factor in music recording is air suspension. To be specific, it’s the internal air suspension. It creates such mechanical isolation of sound that, it reduces noise from being transmitted at all. Again, the perk of such a mechanism will result in clean and natural sound recording.

While talking or singing in front of the microphone, there can be sudden breath explosions. And that’s something that no one can control a one hundred percent.

Many of the music and recording enthusiasts have a common problem with their microphone. And that is- their headphones are not able to catch close and low tone vocal sounds. But this Shure SM7B Cardioid Dynamic Microphone is a quite fine exception.

There is a detachable windscreen with this model, which has a duty of reducing plosive sounds and take care of those low tone sounds that we were talking about. So, close up vocals or narrations won’t be missed out anymore!

Worrying about the mounting process and installation? We hope you don’t. Because this microphone has a fine mounting system from Yoke type. If you had used Yoke type stand before, you might know it very well that they can hold the microphone right on the ground, even if you put your hands on it.

To make the installation process easier, there are a quick connecting captive stand nuts available. The easy mounting and dismounting properties of these nuts will let you adjust the position of the microphone quite easily.

The last thing that you want from your microphone is to be attracted to the off-axis sound, right? They are not a part of your original music, and you don’t want them to be in your music recording either.

To give you a hand, there is a classic and smart cardioid polar pattern. It’s quite uniform with the frequency and it’s also symmetric to the axis. Therefore, there will be a maximum rejection and a minimum amount of coloration of those off-axis sound we’re talking about.

For all these essential features and recording-friendly specs, we’re sure that you won’t’ mind paying some extra bucks. So, the over the bar price of this microphone might seem to be a worthy thing to you.

Long story short, Logic uses Shure SM7B Cardioid Dynamic Microphone for all of his musical recordings and youtube videos. And if you had been attentive to the technical details of the recording device, you might understand why.

Good luck and see you in the next post!